A Kingdom Man Passes the Baton 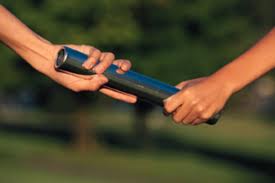 The Christan life is a race: sometimes a sprint, mostly a marathon but always in the context of a relay race. – B.R.K

Here is a great article from Tony Evans that I want to share with you.

Leadership is more like a baton than a trophy. You keep a trophy, but you hand off a baton. In a race, if you don’t hand off the baton, you lose. –Bruce Miller, coauthor of The Leadership Baton

Few sporting events can match the excitement of the 4 x 100 relay. Speeds surpass twenty-three miles per hour as four sprinters fly around the track, passing a baton to see who can make it to the finish line first. Since the inception of the 4 x 100 relay, the United States men’s and women’s teams combined have claimed Olympic gold twenty-five times. The next closest nation, Jamaica, has earned just three gold’s in the event.

At the 2008 Summer Games, the United States entered with two powerful relay teams. But on a rainy night in Beijing, both the men’s and women’s 4 x 100 teams dropped their batons in the semifinals. In both cases, the missed exchange came when the US team was ahead. And in both cases, the US team was disqualified. We’re living in a generation where men don’t know how to pass the baton of blessing. In biblical times, men lived for the blessing. A blessing involved divine destiny, significance, authority, and a productive future. The blessing was always tied not merely to what you were, but also to what you were destined to become. This generation of boys has never been blessed because there is a generation of men that has never been blessed. So there’s nothing to pass down. It’s like running a relay race with no baton.

Kingdom men, man up. Turn your hears towards your children. Learn the importance of the blessing. Make sure God’s covenant promise is passed down to future generations.

The Christan life is a race: sometimes a sprint, mostly a marathon but always in the context of a relay race. – B.R.K. This quote, worth re-quoting, is one of the main points of Grace Legacy Builders and is always interlaced into the matrix of equipping men as spiritual leaders.

Hebrews 12:1-2 (ESV)
Therefore, since we are surrounded by so great a cloud of witnesses, let us also lay aside every weight, and sin which clings so closely, and let us run with endurance the race that is set before us, looking to Jesus, the founder and perfecter of our faith, who for the joy that was set before him endured the cross, despising the shame, and is seated at the right hand of the throne of God.

God established a testimony in Jacob and appointed a law in Israel, which The LORD commanded fathers to teach to their children, that the next generation might know them, the children yet unborn, and arise and tell them to their children,

1 Corinthians 9:24-27 (ESV)
Do you not know that in a race all the runners run, but only one receives the prize? So run that you may obtain it. Every athlete exercises self-control in all things. They do it to receive a perishable wreath, but we an imperishable. So I do not run aimlessly;